Presenting in digest form some of the milestones in the history of Suzumo since its founding more than 50 years ago.

Established as a confectionary equipment manufacturer

Suzumo started off as a developer of equipment for making Japanese-style confections. 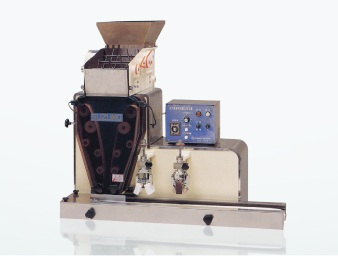 Using the technological and development abilities that brought mechanization to confection-making, Suzumo began developing a machine that would automatically form sushi rice into balls (Nigiri). The company stressed being able to form balls of sushi rice that would be perfected to the same degree as if done by a sushi chef, and took the opinions of chefs into account as it made countless improvements on the machine. The development project that began in 1976 paid off in 1981, when Suzumo completed work on the world's first automatic sushi-forming machine (now called a "sushi robot"). The finished results reflected the company's strict adherence to its credo for the project that the rice should retain its palatibility and the sushi should taste handmade.
At first, machine-made sushi was not deemed acceptable for sushi restaurants. However, consumers saw it as "good for being sanitary," since the food it produced would not be directly touched by human hand. Suzumo would subsequently become a key mover driving the popularity of conveyor-belt sushi restaurants, and also made a major contribution to popularizing sushi.

Development of the sushi-wrapping robot 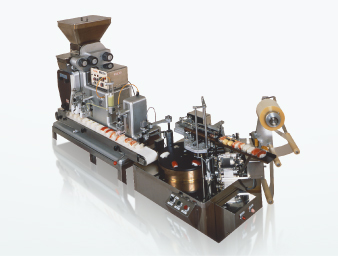 Up to this point in time, sushi was seen as a food to be eaten with your bare hands. Suzumo, however, did away with that stereotypical view and developed a machine that would form and then wrap individual pieces of sushi. This sushi-wrapping robot made it possible for department stores and supermarket to offer sushi takeout where customers could choose the items they wanted, a development that was much appreciated.

Suzumo developed a sushi robot in the style of an "ohitsu" wooden sushi rice bowl that would look good even if it were placed out front outside the kitchen to help maintain sushi's image as a high-end food made by a craftsperson. Sushi is traditionally prepared using this wooden bowl to hold the sushi rice. This sushi robot helps give the appearance to customers that their food is being prepared by a proper sushi chef.

Development of the Fuwarica (The old name is shariben robot)

Suzumo's development efforts have also helped automate the preparation of foods other than sushi. For example, this year saw the development of the "fuwarica", which dispenses cooked rice into a bowl. The machine dispenses rice in a manner that keeps it from clumping, and fills the bowl with the correct amount of the cooked grain. The user can also pick the amount of rice they want dispensed, and fill their bowl with just the press of a button. The robot won high marks for its capacity to improve restaurant and shop operations, and is the most widely adopted machine of its type being used in Japan’s leading fast food restaurants and other establishments.

Newly listed on the JASDAQ exchange

On April 25, 2003, Suzumo made its stock market debut on the JASDAQ exchange.

Suzumo established a local subsidiary in the United States with the goals of improving sales in North America and spreading awareness of Japanese food culture.

This Singapore-based joint venture was established with the goal of boosting sales and service capabilities in the ASEAN region.

Suzumo's local subsidiary opened an office in New Jersey with the goal of improving sales in the U.S. East Coast region.

In the Middle East region, Suzumo promotes the business activity to spread and expand the Japanese rice eating culture including sushi to local consumers.